The shocking news of the sudden death of a former Chief of Defence Staff, Air Chief Marshal Alex‪ander Badeh in the hands of unknown gun men has divided Nigerians along political lines. Many have called for a scrupulous investigation into the assassination of the former defense chief.

Badeh who has been facing prosecution by the Economic and Financial Crimes Commission over allegations of corruption which are yet to be proven, was shot severally as shown in photograph provided by the Nigerian Airforce. See Photographs.

Badeh denied all the charges against him and continued the legal battle against the anti-graft body.

Alex Sabundu Badeh was born 10 January, 1957 in Vimtim, Mubi LGA of Adamawa state. Alex‪ander Badeh was educated at Vimtim Primary School and Villanova Secondary School. He obtained his secondary school certificate in 1976 and gained admission into the Nigerian Defence Academy in 1977 as a member of the 21 Regular Course.

Alex Badeh was commissioned Pilot Officer on 3 July 1979 and commenced his flying career at the 301 Flying Training School on the Bulldog Primary Trainer aircraft in 1979. Between 1981 and 1982 Alex‪ander Badeh attended the Undergraduate Pilot Training at Vance Air Force Base in the United States Air Force. He was at the 301 Flying Training School (FTS) as a squadron pilot and later became an instructor pilot on the Bull Dog and DO-228 aircraft.

Alex Badeh was Commander of the Presidential Fleet, during the Olusegun Obasanjo’s presidency. The Presidential Fleet Crew flew around the world frequently and by 2002, Badeh logged over 6000 flying hours shuttling VIPs, dignitaries, top government officials and Heads of State.[c He was given the green light to fly former United States Presidents Bill Clinton and Jimmy Carter on different occasions after extensive check was done by the United States Secret Service.Badeh’s professional dexterity on duty earned him commendation and an autographed pen from Koffi Anan and the then UN Secretary after flying him to an official trip.[c

Alex‪ander Badeh rose through the ranks and became Air Vice Marshal in 2008.

He held the post till July 13, 2015, when he was retired by the Buhari administration. Since then, Alex‪ander Badeh had faced a court trial for alleged theft of defence funds during his tenure until his demise on the 18 of December, 2018.

Alex Badeh had hoped to open defense in the alleged N3.97 billion fraud charge preferred against him by the Federal Government on Jan. 16, 2019 . Solicitors for both parties agreed on the date on at the Federal High Court, Abuja, in November following the failure of the defense team to enter a no case submission as was agreed on Oct. 23 when the matter came up. 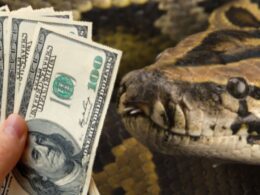 A mystery snake is said to have sneaked into the accounts office of Nigeria’s admission board office, the…
byDesmond Ejibas

The General Overseer of Omega Power Ministries Apostle Chibuzor Chinyere has awarded an educational scholarship, up to University…
byDesmond Ejibas

Nigeria has surged past 12,000 in the number of persons who have tested positive for coronavirus (COVID-19) infections.…
byJoe Ogbodu