A call made to 911 in Chicago called falsely reported a mass suicide was about to go down at R. Kelly‘s Chicago home, sending police scrambling to singer’s home.

Police descended on Trump Towers after an anonymous caller reportedly told police that Azriel Clary and four other women would be committing suicide in R. Kelly’s Chicago home.

It is now being reported that the call contained illegitimate information. R. Kelly had been meeting with his legal team for a couple of hours before police showed up and there was reportedly no strange activity regarding Azriel Clary or any other women. Listen to the police dispatch below.

Sources close to the embattled singer tell TMZ that police officers just left after going inside R. Kelly’s unit and speaking to R. Kelly’s attorneys, who assured them everyone was fine.

Turns out the call was from the National Human Trafficking Hotline.

It appears the call was bogus because our sources say R. Kelly had been meeting with his attorneys in his pad for at least two hours before cops showed up.

Kelly has been in and out of jail over charges on sexual misconducts and unpaid child support.

Everything picked up after the Surviving R. Kelly docu-series aired on Lifetime, prompting many people to take the singer out of their playlists and speak out against him. He is currently awaiting trial in a case where he’s being accused of sexually abusing several women, the majority of which were underage. 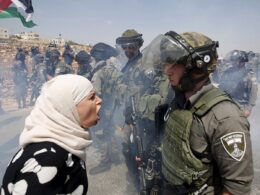 Nigeria is a deeply religious country. No matter how we try to sound objective about our religious issues,…
byPhilip I. Thomas
Read More