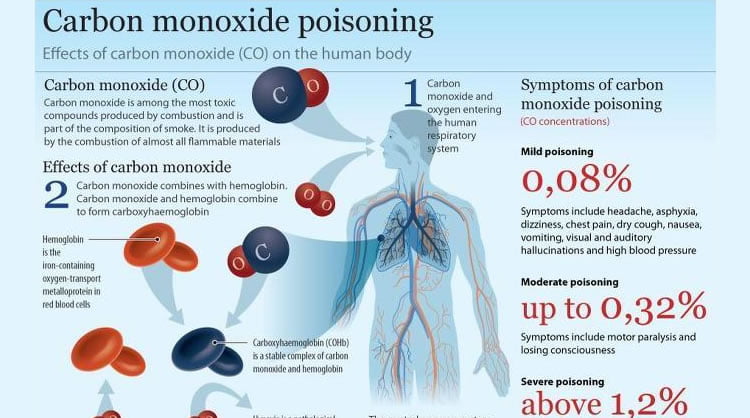 The deaths of eight family members in Maryland, USA has raised attention to the dangers of carbon monoxide poisoning in the country.

Every year 400 Americans die from exposure to carbon monoxide, according to the U.S. Centers for Disease Control and Prevention, with 4,000 hospitalized and 20,000 ending up in the emergency room as a result of exposure to the colourless, odourless gas. Winter can be an especially dangerous time since space heaters, generators and other portable heating devices can leak carbon monoxide.

The signs and symptoms of exposure can be subtle, leading people to try and sleep it off instead of heading straight for the emergency room. So here’s the information you need to know to stay safe from carbon monoxide poisoning.

Carbon monoxide can be deadly but its initial symptoms can be mild, starting off as just a headache and sleepiness.

In severe cases, a person can become confused or faint due to the effects. In rare cases, death is possible.

A Doctor may also notice a slight redness in the face or lips of a person with CO poisoning in rare cases, Rose said.

“In actual reality, few physicians ever see that,” Rose said of the red face symptoms. “Generally there’s not really anything you can look at by telling someone.”

The CDC recommends that everyone have a carbon monoxide detector in their home. Rose suggests that people who live in a multilevel home have detectors for every floor of their home, similar to their smoke detector.

Common sources of carbon monoxide are internal combustion engines or heating sources. Every year, doctors hear stories of people killed by carbon dioxide as they tried to heat their homes, Rose said.

To protect against carbon monoxide poisoning, the CDC recommends that heating systems that have chimneys be checked by a technician every year. Make sure gas appliances are vented properly and never use a generator, camp stove or oven as a heater indoors.

The Maryland family killed on Monday from carbon monoxide poisoning were using a generator to heat their home, according to authorities.

How Does Carbon Monoxide Poisoning Work?

When the body absorbs carbon monoxide, hemoglobin cells can start to attach to those molecules instead of oxygen molecules. As a result, the blood cannot deliver vital oxygen to organs and muscles.

There is no “safe” level of exposure to carbon monoxide, Rose said, and acute symptoms can occur in minutes or days depending on the level of CO exposure.

Doctors usually treat carbon monoxide by giving the affected person oxygen through a mask, according to Rose.

In extreme cases, doctors can rush a patient to a hyperbaric chamber, which can help raise blood oxygen levels more quickly since the oxygen is pressurized, Rose said.

Early treatment is critical, according to Rose, who said patients shouldn’t be afraid to get help for symptoms that may appear minor.

“It’s important for people to be aware if they have any symptoms at all, they should come in and get checked out,” she said. “If they suspect that they could be [exposed] it could be very life-threatening to not seek medical attention, especially in winter time.”