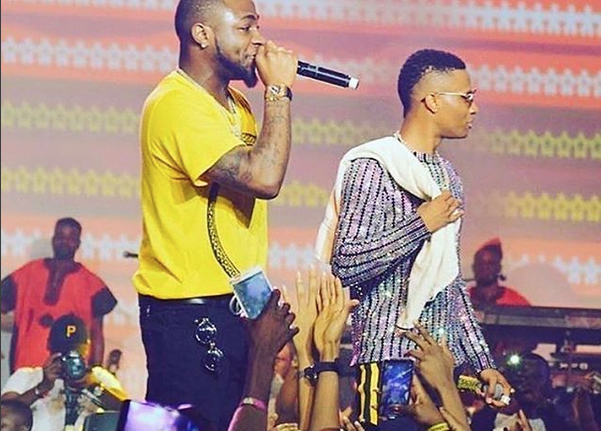 Davido and Wizkid Perform together on the same stage

There seems to be a new wave of reconciliations knocking down aged long beef(s) and mending old fences in the Nigerian music sphere as Nigerian top celebrity rivals Davido and Wizkid perform together in multiple concerts recently.

Both artistes reconciled during Wizkid’s concert which held at the Eko Convention Center in Lagos on Sunday night.

Wizkid made the first move by inviting Davido to share the stage and spotlight with him to the delight of the audience.

Wizkid and Davido before the supremacy beef

Both stars performed Davido’s hit track, Fia and it was such a beautiful sight.

This wowed fans as they were screaming to see them in a peace performance on stage. On Sunday, Wizkid debunked speculations making the rounds that he had an age-long beef with Davido.

He said, “I don’t dwell on things like that. Music is my focus, not rivalry. It’s all about making good music for me, and I believe that the sky is wide enough for all to fly.

“This year has been very great for me and I am thankful to God and all my fans. I have been very busy and it has been a roller coaster for me. I don’t take it for granted, and I will always put my best into all that I do. It is about showcasing Nigeria to the world in the proper light, and I am glad that there is now more focus on African music. There are indeed a lot of talents out here.”

In a similar twist, Davido on Wednesday night reunited the Mo’Hits crew – one of Nigeria’s most favourite boy band at his 30 Billion Concert.

The singer had earlier announced that he will be offering a surprise at his show.

Mo hits crew before the split

The Mo’Hits crew comprising of Don Jazzy; the Entertainer, D’Banj; vocal powerhouse, Wande Coal; as well as Dr Sid, K-Switch, Ikechukwu and D’Prince had gone on a very painful split in 2012 over several internal disagreements.

According to Davido, it took him two months of effort to bring this moment into fruition.

This is the first time the Mo’Hits crew will be performing together on stage since their split five years ago.

The crew were also seen cracking jokes inside elevator outside the show.

Christopher Sowah (Cypress) is a Ghanaian travel writer and blogger with strong passion for the creative arts industry & business. Sowah writes for Report Afrique from Ghana.