OPINION | Russia 2018: Ifeanyi Ubah and the audacity of leadership

Western conspiracy against Russia had certainly gone beyond the excessively contrived failure of socialism. Save for the global financial meltdown of 2008 that had poignantly exposed the buttock of capitalism and critically challenged its ideology, what had become a wrong entrenched opinion about the former Soviet leader could have been far worse. That development, however, made people and even scholars to rethink, review and reappraise socialism. But the 2018 World Cup has now significantly changed the world view about Russia. It is a nation that works.

The 2018 World Cup has surpassed expectations as a well-organised soccer fiesta. Playing host to millions of global audiences and fans who came to watch the world’s biggest sporting championship has further exposed and even endeared the socialist nation to many who had hitherto, and for a long time, nursed a wrong perception of the country as a terrible place. For some of us who went to Russia from Nigeria and fell into that category, one man made it possible: he is Dr. Patrick Ifeanyi Ubah, an exceptional philanthropist.

The ultimate decider of this positive change in perception has been “seeing is believing.” I sincerely think the Russians and their government have Ubah, the owner of Capital Oil, to thank for sponsoring about 60 Nigerians to the Mundial, as they would say, all expenses paid. Before we all departed Russia for Nigeria, the confessions were unambiguous: Russia works and is far different from as painted by the Western media. The change in orientation did not just happen because we visited Russia and had a good World Cup experience, no. Unknown to many of us, our sponsor had arranged with some tour guides to expose us to the rich historical knowledge of Saint Petersburg – the social capital of Russia.

The Western world had consistently limited and reduced Russia to a liberal-induced contrived narrative of its leadership: Vladimir Putin is bad; so Russia is bad. But for many us in Nigeria – those who went and those who have been converted by our stories, the misconstrued perception of Russia has changed. On every occasion we met with Dr. Ubah in Saint Petersburg, he said it very clearly, and repeatedly too: “Coming to Russia is not just about the round leather game; you have so many things to learn and gain here.” That is the hallmark of purposeful leadership. He financed all the exploits.

Aside the fact that more than 90 percent of the people that the business mogul took to the 2018 soccer fiesta had never been to such a big football event before, it is 100 percent that none had ever been to Russia. It is however significant that Ubah had planned the journey to achieve more than just watching the game of soccer in Russia. He wanted Nigerians to see, learn and gain useful knowledge about Russia’s profound history. And truly we did. We were able to connect the great history of Peter the Great, the founder of Saint Petersburg, with the reality of his exploits.

Let me state that it is in the wisdom of Ubah that the journey was meticulously planned to have a representation of Nigerians from the six geopolitical zones and across religious divides. I know for sure that the Anambra-born football enthusiast is not contesting for the President of Nigeria in 2019, which could have been a major motivating factor for such a big spending, if viewed through the prism of politics. But this is not the first of such noble and patriotic contributions to sports and development. He has also financed several purposeful adventures to the UK, US, China, Egypt and different parts of the world.
It is not hidden that Ubah is a man of many significant parts: he loves politics of development; he loves good football; and he loves his businesses. But I admire his courage the most. Like Peter the Great who worked very hard to carve a niche for himself, Ubah’s audacity of leadership, selfless sacrifices and accomplishment have combined to etch his name on diamond as a great leader. The Afa-Igbo Efuna Initiative would certainly endure for ages as a most significant contribution to the Igbo nation. This and other unparalleled strides of Ifeanyi Ubah in human capital development often make me to refer to him as the Asiwaju of Igbo nation.

The last time I could recall that a Nigerian had selflessly invested in sports in the manner of Dr. Patrick Ifeanyi Ubah, was in the heyday of the late M.K.O Abiola, African Pillar of Sports. However, Abiola never had the opportunity of sponsoring Nigerians to watch the Senior World Cup. When Nigeria qualified for the first time in USA 1994, he was battling to retrieve his June 12 mandate; and, when Nigeria repeated the feat in France 1998, he was already a political prisoner. It would therefore be a welcome development if the Confederation of African Football (CAF) decided to decorate Ubah at a point.

The leadership audacity so far demonstrated by Ubah towards sports development in Africa, as a single entity, is currently and arguably unrivaled. This is one man who has given his all to sports development. He also owns the Ifeanyi Ubah Football Club that is plying its trade in the Nigerian elite division. It would be safe, historical, but unflattering, to concede to the logic of honour that the man be rightly accorded the indisputable Pillar of Sports on the continent. He deserves it. From whom much has been done, honour should be given.
Before the World Cup ended in Russia, Ubah had already set his sights on Qatar 2022, thinking of how to improve on 2018. He told our team this much before we departed Saint Petersburg. A visionary leader certainly plans ahead. But before Qatar, comes his “One-Family One-Footballer” programme with the Anambra FA . As a member of CAF himself, this is one vision that Ubah is planning to advance beyond Nigeria. I commend his resilience and unparalleled love to advance the cause of the common man.
It is gratifying to hear that the people of Anambra South have asked him to represent them in the 9th Legislative Senate come 2019. As a matter of concern, the Southeast needs a serious rejig of its representation in the National Assembly.

The zone needs courageous and forward-looking men like Dr. Patrick Ifeanyi Ubah. But, let me make this passionate appeal: the fortune of APGA has risen enough to make a big impact in the Southeast. I wish to strongly advise against going into an “unholy alliance” with a fatally flawed party. APGA should go at it alone and the prospect is big with Ubah.

Atoye contributed this piece from Abuja

A group of former militants from the Niger Delta on Wednesday, December 19, took their protest to the…
byMiebaka Inyeinengi 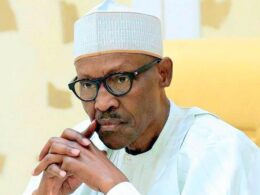 President Muhammadu Buhari on Friday approved the constitution of the governing boards of agencies and parastatals. He has…
byMiebaka Inyeinengi 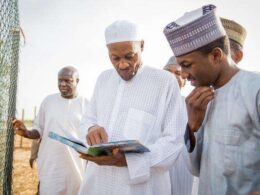 Undergoes surgery in an undisclosed hospital… The Son of Nigeria’s President, Yusuf Buhari, was on Tuesday night involved in a…
byDesmond Ejibas