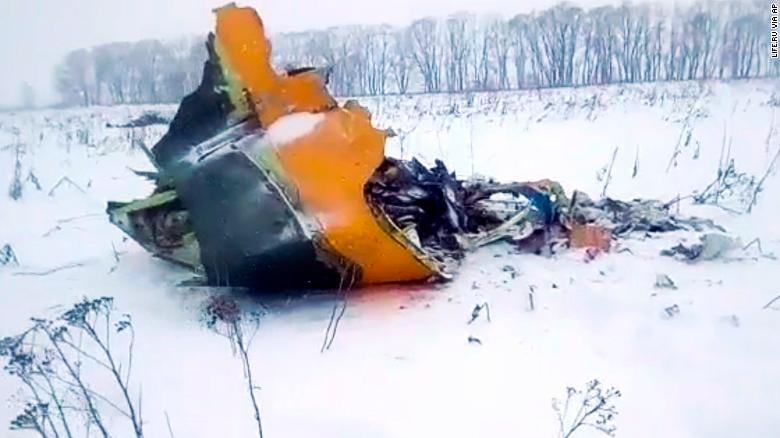 A Russian passenger jet crashed shortly after taking off from one of Moscow’s major airports Sunday, killing all 71 people aboard reports local media.

The ill-fated plane, an Antonov 148 passenger airliner operated by Saratov Airlines, was carrying 65 passengers and six crew members when it left Moscow’s Domodedovo airport for Orsk, a city about 1,000 miles southeast of the capital near the Kazakhstan border.

Investigators said the plane took off at 2:21 p.m. and reached an altitude of 6,400 feet before disappearing from radar screens about four minutes after takeoff, the Tass Russian news agency reported, citing the Moscow Inter-regional Transport Prosecutor’s Office.

The wreckage of the aircraft was found about 25 miles south of the airport in the Ramenskoye District. Television reports showed investigators searching in a snow-covered field. The images showed pieces of the wreckage spread out across what investigators said was about a half-mile radius.

Russian investigators said they were not ruling out weather conditions, a crew error or a technical malfunction as a possible cause of the crash.

Moscow and the surrounding regions have been hit by several heavy snow storms this month, including one that left the Russian capital with more than 22 inches of snow in less than 36 hours. There was light snow and fog in the Moscow region Sunday.

President Vladimir Putin ordered a special commission to investigate the plane crash, according to his spokesman, Dmitry Peskov. Putin postponed a trip to the southern resort city of Sochi on Sunday to oversee the response to the crash, Peskov told reporters.

The Antonov plane was built in 2010 and was put in service since July of that year by Rossiya Airlines, a subsidiary of Aeroflot, Russia’s flagship airline. Saratov Airlines, a regional airline operating the flight from Moscow to Orsk, said the plane was out of service for two years from 2015 until February 2017 while waiting for new parts, according to Russian news agencies. Saratov Airlines said there were no complaints about the plane prior to takeoff on Sunday.

The Antonov An-148 jet was designed by Ukraine’s Antonov company. The plane is manufactured in both Ukraine and Russia. Sunday’s plane was built at the Voronezh Aircraft Building Assn. in southern Russia, Tass reported.

The regional governor of Orenburg, where the city of Orsk is located, confirmed that at least 60 of the passengers were from that region. Three children were among those killed in the crash. Most of the crew was based in Saratov, about 500 miles southeast of Moscow, Russian news agencies reported.

Three foreigners were reportedly killed on the plane, including one Swiss citizen. The other two foreign passengers’ nationalities were not immediately known.

The plane crash dominated television reports Sunday night, with two of the state channels cancelling entertainment programming to run coverage of the crash. Reports included live images of the airport in Orsk, where families were seen crying as they waited for news of their loved ones.